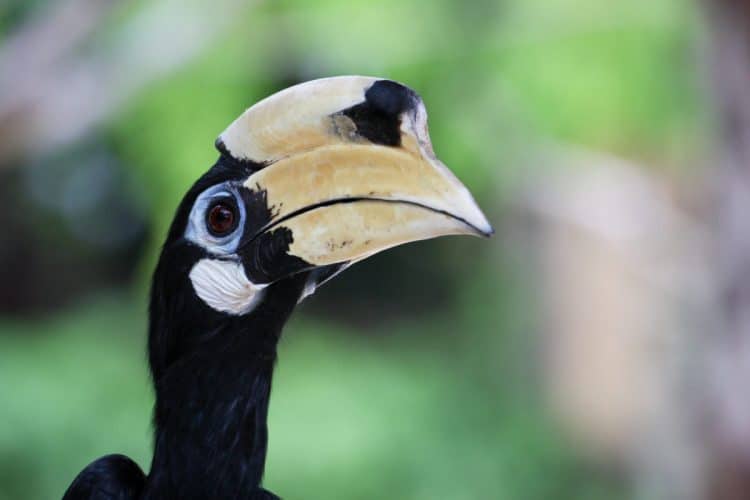 Police in Indonesia’s Banten province arrested two men who were using social media to sell dozens of hornbills, an iconic bird under threat from habitat loss and poaching.

Didin Hendriana, 35, procured the birds, buying them from people living near Ujung Kulon National Park on the western tip of Java, and Luki Hamjah, 20, was in charge of selling them, according to Fajar Mauludi, the head of the Pandeglang Police’s criminal investigation unit.

The traffickers had set up a Facebook account, “Ca Pets,” to sell the birds as pets, and were also hawking them over WhatsApp.

They bought the birds for about $15-20 each and sought to sell them for twice as much, Fajar said.

The trafficking of hornbills in Indonesia is rampant, with the illegal trade moving increasingly online, according to Rangkong Indonesia, a hornbill conservation group.

From January 2017 to August 2021, Rangkong Indonesia identified 51 cases of hornbills being sold online.

A little over half of the cases saw live hornbills being offered as pets — these tended to be wreathed hornbills — while the rest were for their body parts. Some hornbill species have been hunted to the brink of extinction for their distinctive ivory-like bill casques, which are prized by collectors in parts of Asia.

Fifty-one percent of the sales occurred in Java, 37% in Borneo, 4% in Sulawesi, 2% in Sumatra, with the rest unknown.

Hornbills are found throughout Indonesia, on all five of its biggest islands — Sumatra, Borneo, Java, Sulawesi and New Guinea.

The birds play an important role in tropical rainforests, regurgitating and defecating the seeds from foods they consume.

“Protecting the hornbill in nature means we are also protecting the forests and their carbon reserves,” Yokyok said.

This article by Ahmad Supardi was first published by Mongabay.com on 10 November 2021. Lead Image: An oriental pied hornbill, by Matthew Kenwrick via Creative Commons (CC BY-NC-ND 2.0).

What you can do

Support ‘Fighting for Wildlife’ by donating as little as $1 – It only takes a minute. Thank you.

Fighting for Wildlife supports approved wildlife conservation organizations, which spend at least 80 percent of the money they raise on actual fieldwork, rather than administration and fundraising. When making a donation you can designate for which type of initiative it should be used – wildlife, oceans, forests or climate.